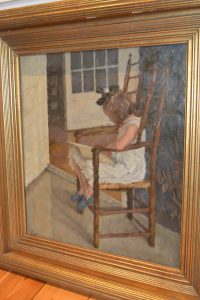 Painter born in Edinburgh, Scotland, she studied at the Ridley School of Art, Putney Art School, 1893 and at Westminster School of Art under Fred Brown but in 1892 when Brown transferred to the Slade she followed him there staying for a further two years. A keen student, she continued her studies and during the period 1916-19 resumed her studies at the Slade School. She also took sculpture classes under James Harvard Thomas and attended evening classes with Walter Sickert. She had already exhibited at the RA as early as 1898 and was elected the first woman member of the NEAC in 1900.

Walker held her first solo exhibition in 1927 at the Redfern Gallery and in 1936 was elected LG and also showed with the SWA. Living in the Robin Hood’s bay area of North Yorkshire, she was a member of the Fylingdales Group and in 1940 she was elected an Associate of the RA and her CBE of 1938 was surpassed when she was created a Dame in 1943. Her work is in the collections of most major art galleries in the UK including Brighton & Hove Art Gallery, BC, Fitzwilliam Museum, Hull University, NPG, Rotherham Art Gallery and the Tate Gallery.