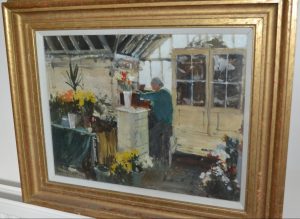 Painter, born in Beverley, Yorkshire. He began painting in 1953 following his National Service with the Royal Sussex Regiment and is largely self-taught having begun painting and, when he retired from banking in 1986 took it up full-time. He exhibits regularly with the RI in London and is a member of the Armed Forces Art Society. His first solo exhibition was held at the Hampton Hill Gallery, Middlesex in 1981. In the 1970’s he started demonstrations of watercolour painting techniques to local art societies and following the death of his friend and mentor Edward Wesson he began tutoring at Phillips House, Dinton. He has also shown at the RWS Open Exhibition and at the Catto Gallery like his son Bruce Yardley. In 1990 he was awarded the Watercolour Foundation prize for work exhibited at the RI and is now an elected member of that Society. More recently he has exhibited at the Bourne Gallery, Reigate.